Disneyland, a magical place where dreams come true. During the recent December holidays  we brought the kids to Tokyo Disneyland as it was the 2nd nearest Disneyland from where we are staying. We brought them to Hong Kong Disneyland a few years back and they really enjoyed themselves there even though it was quite small as compared to the various theme parks that we have visited.

We arrived at the park bright and early as we wanted to maximize the time that we had allocated for the park. It seemed that everyone else had the same idea as there were many long queue’s at the entrance when we arrived.

We  pre-purchased a 2 day pass for the Disney parks so it didn’t take too long to clear the entrance. After about 15 minutes in the queue we cleared the gates and entered the park ready to go on the 1st ride.

The majestic looking Cinderella’s castle caught my attention. It was located at the center of the park and overlooked the gardens around it. We didn’t have a chance to enter the castle as there was a really long queue. Cinderella’s Fairy Tale Hall wasn’t high on our priority list of rides/shows that are a must see as the boys are not into princesses and we headed for the thrill rides instead.

We headed over to Tomorrowland and secured the fast pass for  the Space Mountain(Indoor roller coaster ride). After securing the fast passes the boys and I had a round at the Grand Circuit Raceway. 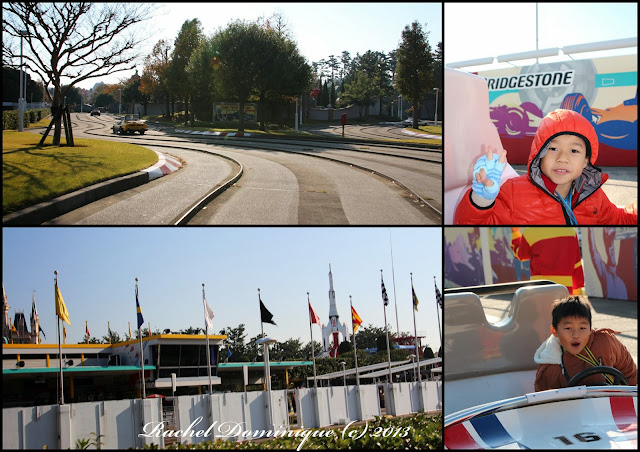 The boys in the cars

The boys couldn’t wait to get behind the wheel and experience it for themselves how a car accelerates and slows down by working the pedals.  It was really fun and they wanted to go for a second round but I had to say no or else they wouldn’t have enough time for the other rides at the theme park.

After  the two rides at Tomorrowland we went over to Toontown for a different Disney experience. ( To be continued in Part two of this post ).

7 thoughts on “A Visit to Tokyo Disneyland- Part One”